Thoughts on Reading About St. Charbel 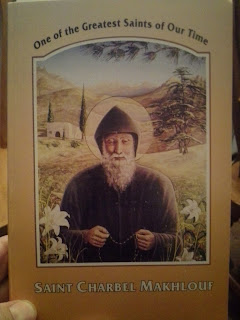 I bought this little book after I watched a movie about St. Charbel that is available on Youtube.

One story mentioned in the book is this: after his ordination to the priesthood, Charbel’s family wanted him to come and visit them one more time. He declined to do so, saying, “The religious who visits his parents and stays with them after his ordination has to start becoming a monk all over again.”

That may seem extreme, but the author of the book points out that Charbel was deeply influenced by the Imitation of Christ, where it is written that

“The monk who leaves his monastery is like a fish out of water; he dies.”

“I have never been among men without returning less of a man.”

The author goes on to note that:

This unnecessary return to the world which, according to the Imitation, renders one imperfect, constituted for Charbel a lack of sincerity in the seeking out of God, and a step backwards.

I myself have thought quite a bit recently about the implications of leaving one’s family – completely – in order to commit oneself to the eremitic life. The reality of it is staggering, in my view.


Lord Jesus Christ, have mercy on me.
Posted by Hermitess Photini at 7:45 AM