I haven’t been in my parish for Holy Week in years. That means I have to find someone to do the requisite antependium changes in my absence. Each year, the same man has done it, but this year he declined. I found another friend, who is an acolyte, to help me. It was a pretty simple change, and he was quite willing to take responsibility for it.

During the Our Father, one of the women approached me to say that she wanted a different “altar cover” on the altar for Easter. I basically tried to brush her off…we were supposed to be praying the “Our Father”!

On Easter Sunday afternoon, I received an email from my acolyte friend who had agreed to take care of the altar. He told me that he had stripped the altar on Holy Thursday and placed the antependium in a place where it would not wrinkle, but that when he returned on Saturday morning to replace it, someone had put it in a drawer and put something else on the altar. He didn’t know what to do, so he told Father, who said it would be okay.
I went to check on things today, and saw that the altar was vested like this: 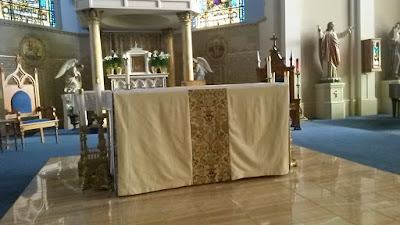 Couldn't she at least have pressed it?! The only saving grace of this altar cover is that it matches the chasubles that the priests and bishop wear when they concelebrate at the Cathedral. Personally, I think the chasubles should also be scrapped.

I put on the one we’ve been using, which I think is much more appropriate. Yes, I’m the one who made it, but that is not why I want to use it. I want to use it because it is more traditional, and more likely to inspire awe and reverence for the altar, which is Christ! So now, once again, the altar looks like this: 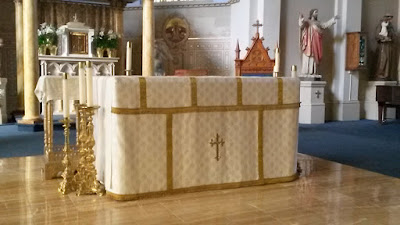 The woman who stepped in to have her own way basically exchanged a King’s majestic robe for a dowdy (though very well-made) carpenter’s apron! And she has no idea why that’s a problem. She has no idea that she should have at least asked Father’s permission. Also, she was one of the two musicians for Palm Sunday, and they clearly had no idea about appropriate music for Mass. They did not choose outlandish ditties (thanks be to God!), but they chose a Gloria with a refrain (not permitted!), and an Agnus Dei that started out “Jesus, Lamb of God…” for each line. The addition of the name of Jesus is also not permitted!
The depressing thing is that no one with any authority will correct this woman. Neither the bishop nor the parish priest seems to have any desire to make our worship conform to the mind of the Church! At least, they do not seem willing to inform the parishioners who take care of such things about what is appropriate and what is not. How will they ever know, if even the bishop will not say something? The woman who made the unilateral decision to change the antependium is not young. She’s in her 70’s. She should know better; but she doesn’t. I don’t think it’s really her fault. Even if she had a sense of awe and reverence for the liturgy prior to Vatican II and the advent of the Novus Ordo, she’s had decades of “un-learning”; people have be indoctrinated to believe that we’re all about hugs and handshakes and felt banners rather than true beauty and reverent liturgical worship.

It’s a shame that this is so. The people of our parish could be helped to grow spiritually in a very meaningful way if only the bishop and the pastor would teach them.

Posted by Hermitess Photini at 9:37 PM