Wiping the Face of Jesus 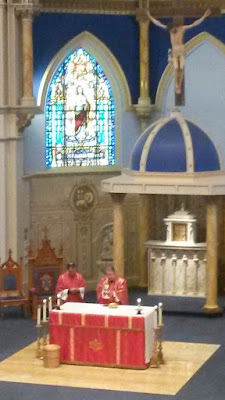 The other day, I went in to the Cathedral to change the antependium for Palm Sunday, and heard singing as I entered. At first my heart sunk, because I had been previously subjected to having to listen to bad music being practiced while I worked on the altar. But as I came into the church, I realized it was someone practicing chant! It was one of the Kyries.

The woman who was singing was standing way at the back of the church. No one else was present. I walked down the aisle to find out who she was. We chatted briefly, though I didn’t find out as much as I would have liked, because we both had things we were intent on doing. I asked her if she was a parishioner, and she said no, just an occasional visitor. Darn! I was hoping there was another parishioner who would help me push for some chant in the Mass at the Cathedral! She told me she is just learning the chant. She has a very good voice.

We talked a little about the state of the Church, and about the state of the liturgy in most parishes. She told me that there are a couple of things she tries to focus on when she is at a “bad” Mass, and one really struck a chord with me. She said she thinks about Veronica offering the cloth to Jesus to wipe his face. She talked about how awful the face of Jesus must have looked then – the blood, the spittle, the sweat, the dirt…the bruises and broken nose, the swelling: an almost unrecognizable face.

“The Mass is the face of Jesus to us,” she said, “and they have done terrible things to it. It’s ugly to look at. ‘There was no comeliness in him…He was bruised for our transgressions.’ So I think of Veronica wiping His face. I think of my participation in the Mass as a way to imitate what Veronica was doing.”

I liked that thought, and told her so. Then I said, “Well, I must get back to my antependium…”

“There! You see, your antependium work is your way of wiping the face of Jesus,” she told me.

I liked that thought, too.

May your Tridduum be blessed, and may we all comfort Jesus by wiping His holy face, especially when we see it beaten, bloody, and bruised in bad liturgy.

Posted by Hermitess Photini at 5:46 AM No comments:

God Has a Sense of Humor 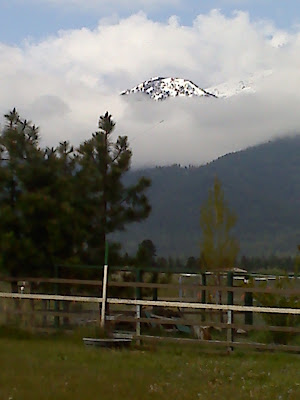 I don’t think God engages in April Fool’s jokes, but He certainly proves His sense of humor time and again!

Long ago, I was the parish secretary at my current parish. I had been Catholic for just one year when I was chosen for the position. That is actually a joke in itself: I was given the job because the pastor couldn’t find anyone else to take it! It turned out to be a job I enjoyed more than any I had ever had before. But while I got along with the pastor for most of the time he was there, by the time he was transferred I had learned some things about him that drove a wedge between us. Interestingly, just two weeks before his departure, he was extolling my virtues and telling me he would recommend to the new pastor that I be given a raise; and 2 days before he left, I was his number one enemy, and he actually told me not to come to work for the remaining days of his tenure.

We later made amends, and I try not to harbor resentment against him. I haven’t seen him in at least 8 years.

My spiritual director is fond of telling me that “God writes straight with crooked lines.” And indeed, it is interesting at times to look back on my life and see how all the twists and turns resulted in bringing me “straight” to the truths of the faith, and into contact with various people who've had a big impact on my life.

Well…about 2 years ago, the wheels started turning which would bring my best friend Liz – we met in California when our children were playing T-ball on the same team, and we have been part of each other’s lives ever since -  to live in a town only 2 hours away from me. We were both happy that we would be able to visit in person more often now. But it was quite a circuitous route that brought her and her husband from California to Guatemala to Texas to Idaho, and it was filled with the little things that make you say, “Huh?!” and realize that God’s hand is on the steering wheel.

Liz and her husband found a good parish with an orthodox priest and a tradition-minded assistant pastor (who has been ordained only one year, and just happens to have received training in saying the EF Mass). Liz approached both pastors to ask them to consider purchasing antependia from my “Altarations” business. The assistant pastor was enthusiastic, and the pastor was open to the idea.  Their chapel has had a violet antependium and ambo frontal for most of Lent, and the big altar in the church will have a yellow-gold antependium for Easter. I’ve been to the parish a couple of times to work on the project and have talked with both priests, but mostly the assistant pastor, who is quite traditional in his outlook.

Then came yesterday…and my friend mentioned something about how some days you feel like you’ve been run over by a truck. So I sent her a private message asking, “Rough day?”

“I’m afraid to tell you,” she replied.

Turns out, she had just found out her newly-found beloved pastor is being moved! That was enough of a shocker for one day, but there was more. She said, “Guess who will be the new pastor?” I thought it an odd question, since I do not live in Idaho; and I know only one priest (other than the two at her parish) in Idaho. I know him because he used to be in our parish, and I was his secretary – yes, the priest who asked me not to show up to work for the last day or two of his tenure there!

No. Really? Seriously? Really?!?! What are the chances of that happening?! Out of all the priests in Idaho, it’s this one? Out of all the parishes in Idaho, that particular priest is being transferred to the only one – the ONLY one – where I have any connection whatsoever to any of the parishioners or priests?!  My mind was completely boggled.

I’ve said it before, and I’ll say it again: I don’t believe in coincidences!

Liz and I noted to each other how odd this whole situation is – all the way from her move to Idaho in the first place, the way things played out in her ending up at that parish, to my becoming involved, at least indirectly, in that parish.  What in the world is God up to? What is our role in Fr. R’s life? Because I have no doubt I will have some contact with him; the traditional young priest will most likely stay at that parish for the next year. Might we – Liz, her husband (who is a deacon), the traditionalist priest, and me – have a part to play in the conversion of Fr. R? (In charity, I must say that I have no idea what changes might have already been worked in Fr. R. However, given his environment, and the fact that he chose to go to that diocese, suggests that he has likely become more of a “liberal progressive” than he was. And his parish website states multiple times that “all are welcome!”, which as you know has become a code for … well, a less-than-orthodox viewpoint.)

In the end, we agreed that we should give Fr. R a chance, and that we of course must pray for him.  And we will do both.

Just thinking about it makes me chuckle. God really does have a sense of humor!