I shared, a while back, the not-so-great photo of the little baby robins in the nest in the tree next to my chapel. There were three to start with, I think, and I believe one met its end prematurely – as in, before it actually learned to fly. After that, two remained, chirping loudly when the mother robin came bearing worms and other goodies for them. 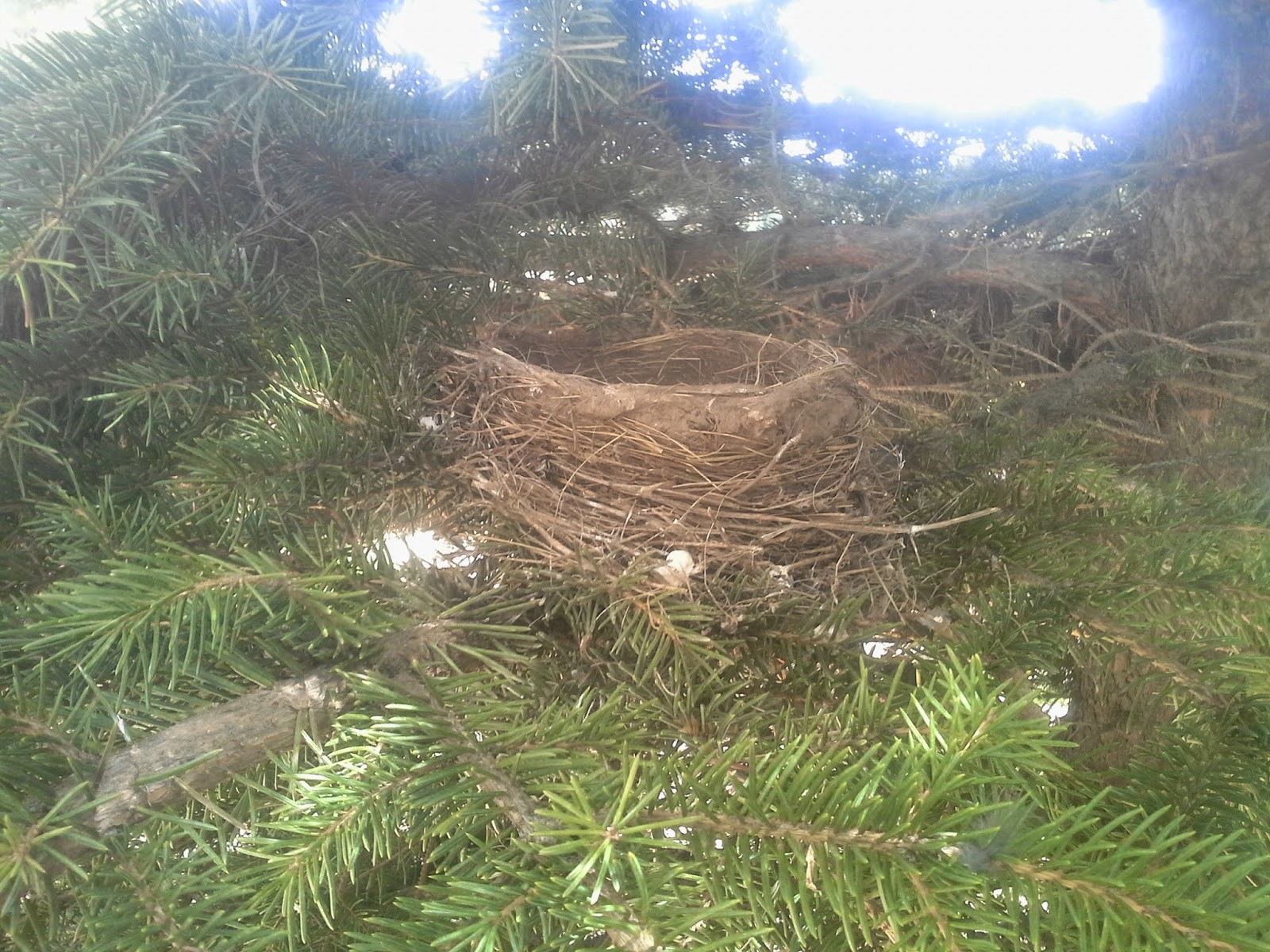 And then, one day, the nest was empty. I spotted what I was pretty sure were the two young robins flitting about the yard. It takes them awhile to really get the flying part down!

Another type of bird we have around our place is the magpie. I don’t like them! They are big, loud, and bold. They are noisy and messy. They eat the cat food that is left in a bowl for our kitties, and the cats won’t even challenge those birds!

The other day, I was praying in the chapel, and I heard loud squawking and chirping. I looked out the window and saw several magpies sitting on the fence, and one magpie on the ground. Beneath that magpie there were some little fluttering wings.

I rushed out and discovered that those little flapping wings belonged to one of the young robins. The mother robin was sitting on a nearby branch watching, but she certainly wasn’t any match for the magpie. Besides, I am not sure how much protective instinct is left in the parent birds once the offspring have left the nest.

(On the other hand, one year I did see a robin bringing worms to offspring that had been flying about the yard for a couple of weeks. They would be pecking around on the ground, and the mother would still come and feed them.)

Anyway, the little robin was not quite dead, but clearly on the way out. I left it and went back inside, but the magpie came right back. I went out again; this time the little robin was definitely dead, and the magpie was eating it.  It just made me angry.  I covered the little robin’s body with an empty plant container just to keep the magpie away from it. Later, my husband disposed of it – probably by flinging in unceremoniously over the fence! But at least I didn’t have to see it!

Now, really, there is no sense in my reaction. These are wild creatures, doing what their nature tells them to do. In my imagination, the mother robin was weeping and mourning the loss of her baby, but in reality I’m sure no such thing was going on. And it’s no use being mad at the magpie; I’m sure there was no “evil intent”. It’s just a matter of nature, and survival, and instinct. 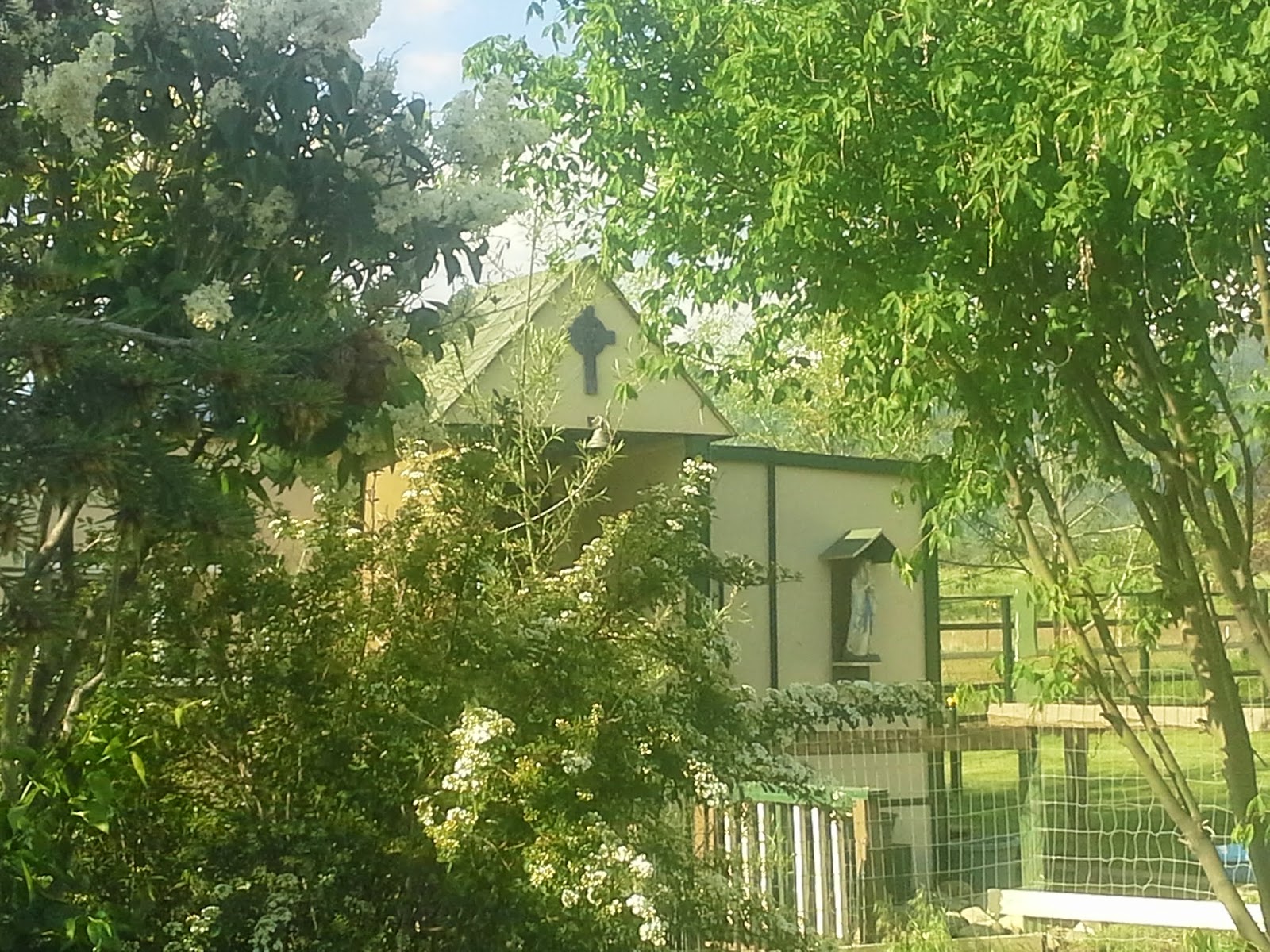 Meanwhile, a pair of mourning doves also built a nest in that little tree next to my chapel. The female has been sitting on eggs for over a week now. (Well, I can’t see the eggs, but why else would they have built a nest, and why would one of them be sitting there so quietly all day long?!) I just think it’s pretty cool.

But today, there was danger in the air (mentally play the theme from “Jaws”). I came out of the house and saw a magpie flying near to that tree, and the mourning dove chasing after it. I ran out and yelled at the magpie to scare it off, but I took my eye off it for a minute and wasn’t sure where it had gone. I glanced around and didn’t see it, but it definitely wasn’t in the tree. I watched for a few more minutes to see if the nasty magpie would return, but finally turned to go to the chapel. As I did, I saw a movement and saw that the magpie had been sitting on the roof of the chapel all that time, watching me! This time, though, it did fly away. I imagine it will be back.

I hope the little mourning dove eggs hatch and I get to see the nestlings before they get attacked by the magpie! Just in case, I have a couple of little rocks handy to throw at the predator should it return on my watch.  (Unfortunately, I am one of those “can’t hit the broad side of a barn” throwers!)

Life goes on. And of course, where there is life on earth, there is eventually death.

Lord Jesus Christ, have mercy on me.
Posted by Hermitess Photini at 11:40 AM