We’ve had more wild fire activity in our area than I’ve seen in the 12 years we’ve lived here.
Our house and property were not in danger at any time, really, but fires came very close to the southern edge of town; we live 12 miles out from the northern boundary. Residents just a mile or so out of town were evacuated; the freeway was closed in both directions, and the highway going out of town to the south was even closed for a time.

Of course, we aren’t the only ones with fire problems, but it certainly seems that the world is on fire. Even though there are no fires raging out of control near us at the moment, the smoke is worse than ever today. The rising sun appeared as a bright red ball. I couldn’t capture the color in a photo, but here’s a similar shot from a few days ago: 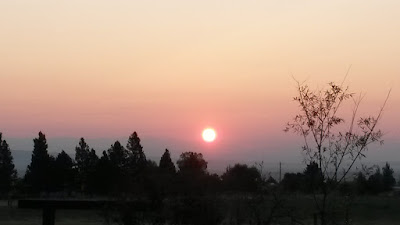 My favorite views have been obscured with the smoke: 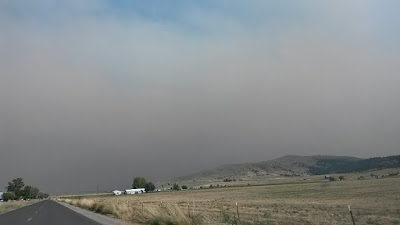 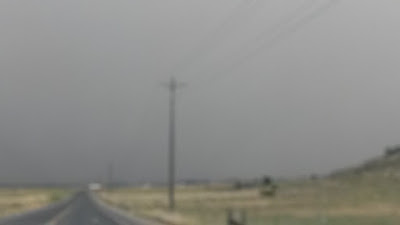 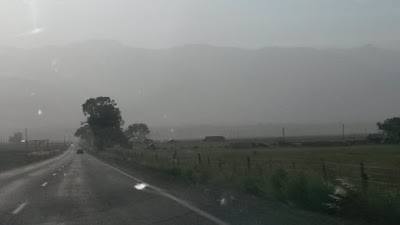 Here the view I usually see instead of that last photo (though there is not much snow right now!): 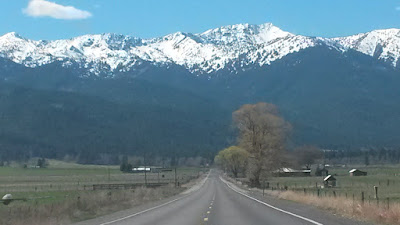 I know that a big part of the reason we are seeing so many forest fires right now has to do with the mismanagement of the forests. Nature has a way of thinning out the old timber to make way for new seedlings, and clearing out the debris on the forest floor to prepare a place for growth. We can help the process through careful logging and controlled burns, as well as by means of cattle-grazing in some areas, but when we don’t do the job, eventually the forces of nature to the work for us.

Still, natural explanations aside, it’s easy to entertain thoughts about the more supernatural implications. The world is on fire, it seems! There are the forest fires, and there are the fires of hell raging in our society as we watch our government ignore the vile fetal tissue and organ harvesting that Planned Parenthood engages in, after they murder their innocent little victims.  The natural world just seems to be reflecting what is happening in the spiritual world.

God promised not to destroy the whole world by a flood ever again. He did not, however, promise not to destroy parts of it, or not to destroy it by other means. Seems to me that we are pushing the limits of His patience!

Lord Jesus Christ, have mercy on me!
Posted by Hermitess Photini at 9:14 AM