My Children Are on the Road to Hell

I have two adult children. 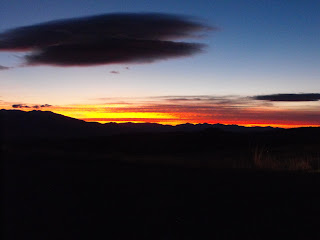 My son lives on the other side of the country from me, so contact with him has been sporadic at best over the last 20 years or so anyway. In recent times, the distance between us has become more than physical, as I finally had to admit to myself that he is entrenched in his own world view and has not even the faintest interest in mine.  In fact, he told me, he “prays” that I will give up my misguided faith in the Catholic Church and see the light of…what?? I don’t know who or what he “prays” to, nor what light he would like me to see. I wonder if he knows himself.

You can see that he is quite a distance down that road to hell.

My daughter lives very close to me, and we are also close emotionally and psychologically. She has been Catholic since birth, essentially. She has been raised in a Catholic family. The problem I see is that my own Catholic faith didn’t emerge until she was 7 years old – I was received into the Church in 2002, and received my first Holy Communion a few months before she did. Since that time, my knowledge and love of the teachings of Christ’s Church has expanded in a huge way, but my knowledge and faith weren’t solidified enough to teach her the faith as I would do if I had it to do all over again.  So I look back and see where I failed her.

Today, I saw even more clearly how I had failed her: she seems not to grasp the reality of hell. She knows, intellectually, that missing Mass for no good reason is a mortal sin, and she knows that she did that recently. She knows she needs to go to confession. And so, when I asked her if she wanted to go, she said yes, and we agreed we’d have breakfast after. But when we arrived, there was a line, and she didn’t want to wait. Well…she’s an adult. Things have changed. I reminded her that she had committed a mortal sin and that it was enough to send her to hell, and that she really needed to get it taken care of. Yeah, yeah, she knows, and she will.

I’m not giving up, though. St. Monica has been a role model for me for a long time. My son is a pre-conversion Augustine. My daughter isn’t taking that sinful road, but she is drifting off the path of holiness nonetheless.

So I pray to St. Monica. I pray for her intercession, and I pray for the gift of tears she had with regard to her son. I ask her to help me pray for my son and daughter as she prayed for her son – with the same fervency and intensity and desire for their salvation.

Posted by Hermitess Photini at 4:48 PM