How Should We Celebrate Christmas? 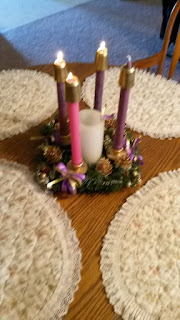 I’m still thinking about the “meaning of Christmas”…or rather, about how we celebrate Christmas, and how we should celebrate it.

Maybe this post will sound sort of like "Bah, humbug!" But I don't mean it that way. I like Christmas as much as the next person, and for many of the same reasons! But still...

I wrote the other day about people with no religious inclination who celebrate Christmas with no sense of why it’s a holy day, why we celebrate it, etc. But now I am thinking about how Catholics and other Christians celebrate Christmas, and I am coming up with a few realizations that may be old news to you, but they are an epiphany of sorts for me.

First, there’s the whole “Keep Christ in Christmas” theme that runs in Christian circles. Of course, there’s nothing wrong with that! But I think it has simply become another trite meme that pops up every year. Just how does one keep Christ in Christmas, with all the other stuff competing for our holiday affections? Sure, many Christians have a crèche in their homes, or they set up their annual nativity scene outside in their front yard. Maybe they bake a birthday cake for Jesus. Maybe they attend Mass (although I think many Protestant denominations don’t even have a church service on Christmas, unless it’s a Sunday). These are all good things, and certainly go toward “keeping Christ in Christmas”, but all too often, I fear, they are just little sidelights done to “prove” we are Christians and that we know we are celebrating the birth of Christ.

But many people – Catholic, non-Catholic Christian, or whatever – seem to think that Christmas is primarily a time for families. It’s important for families to be together for Christmas, we believe as a culture. Christmas is “happy”, “joyful”, “magical”, “warm”, etc. Good Christians try to play down the importance of gift-giving, but everyone knows everyone wants to give (and receive) gifts during the “holiday season”. People have parties, and gifts are exchanged. We all feel sorry for the families that can’t gather all their members in one place, and we all love to see children’s excited faces on Christmas morning when they are preparing to go to Mass…oops, I mean preparing to open the pile of gifts under the tree.

Even a good Catholic friend of mine is agitated because her adult children won’t come home for Christmas, and because the one who is a single mother wants to do the Christmas morning gift-giving at home alone with her little son. My friend says that watching the child’s face light up with anticipation and excitement is a highlight of the day, and she is disappointed that she won’t be able to witness it.

Another good Catholic friend has been sighing for the last two weeks about not feeling the “Christmas spirit”. I told her she’s supposed to feel the Advent spirit first! She wrote a poem about her mixed feelings – anticipation of His birth, she says, mixed with sadness for those who are gone (deceased) or simply away from home. I know my friend is a good Catholic, but I don’t think she understands Christmas and death and Heaven and Hell and purgatory. Again I see a person who has made “being together as a family” the prime mover and end of “Christmas spirit”.

“Being together as a family” is a nice thing. But it can happen any time. Giving gifts is a nice thing, but you can give a loved one a gift any day of the year. Enjoying a festive meal together is nice, but that can be done for many occasions. “Being together as a family” is NOT the end goal of Christmas…or at least, it shouldn’t be. And when these families are together for Christmas, what are they thinking and talking about?  Well, surely some of them are talking about Christ, about His first and second coming, about the hope and joy that His birth inspires in us year after year. Some are surely making plans for Midnight Mass, or at least Christmas morning Mass. (Too many in our parish are simply anticipating the fun and festive singing of the Christmas Eve “children’s Mass”, and some of the protestants in the community attend that one just because it’s so Christmas-y, with carols sung and Santa making an appearance at the side of the holy crib, etc.)

But mostly, I think people are making plans to have a big feast, sort of like Thanksgiving; to arrange a gift-exchange time; chat and laugh and play games. I fear that even among good Catholics and Christians, “the family” has become what is worshiped; I fear that the Christmas tree has supplanted the crèche as the center of attention; I fear that Mass is just something that interrupts the flow of the festivities for a short time; I fear that, even when Mass is attended and Jesus is acknowledged in the home, Christmas has really been reduced to a time to eat, drink, and be merry.

That is not the same as making Christmas a time of hope and joy in the salvation of Our Lord.

Posted by Hermitess Photini at 8:36 AM