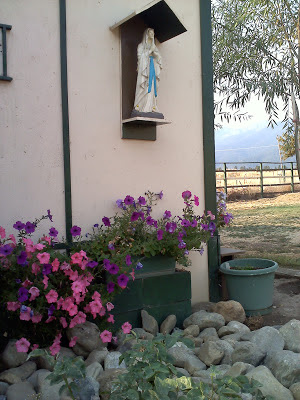 Recently, our daughter and the The Fiancé had dinner with Son #1 and his wife – I’ll call her Jane. During the course of the dinner visit, Jane took my daughter aside for a "confidential" conversation, during which she explained that she might not come to our daughter’s wedding because of me. She fears it would be "uncomfortable" because I (allegedly) think Jane is the prime example of a bad Catholic (or something like that), and she thinks I would manipulate any conversation to make it into an opportunity to berate Jane for not being a good Catholic (for the record, I have never done this, and have not seen my daughter-in-law in person for close to 10 years).

Jane told my daughter that she goes to Mass every Sunday, implying that this makes her a "good Catholic", I guess. She also said she hoped that this frank conversation about me wouldn't upset my daughter, who replied that it certainly did. My daughter also suggested that the only reason Jane thinks I would manipulate a conversation is because Jane herself does that all the time! Ha! My daughter is getting bolder and less willing to put up with that kind of nonsense. My daughter also told Jane that her wedding is HER day, and she certainly hoped that Jane and I would refrain from any kind of interaction that would result in a distraction from the purpose of the day.

Jane said she had hoped that their conversation would be kept just between the two of them, but my daughter said there was no reason I shouldn't know. Jane hoped I wouldn't send her a barrage of emails. Well…I don't think I've ever sent the woman an email that wasn't a response to something she sent me!

I pray for Jane's re-conversion to the faith every day; I count her as one of my “most stubborn” cases. I care about the salvation of her soul, and I've told her so in the past. I'm taking her confession of discomfort as a sign that my prayers are having some effect. To me, it seems perfectly clear that Jane is uncomfortable because she knows I’m right, and she doesn’t want to admit it. She doesn’t want to admit that she has created God in her own image, just like so many other Protestants have done. Once you leave the Catholic Church, you leave true authority behind, and everyone suddenly becomes free to interpret Scripture in the way most pleasing to each individual.  God is what each individual creates Him to be.

Jane, quite simply, has a guilty conscience. I think she knows that her use of artificial contraception all her adult life was wrong; that omitting the required once-yearly sacrament of reconciliation is wrong; that sending one’s Catholic children to a Protestant school is wrong; that condoning and supporting her daughter’s outside-the-Church marriage is wrong. But she doesn’t want to ever admit these things, and I am a constant reminder – just by my very existence – that she has missed the mark.

The prayer I pray specifically for Jane, and for a few other stubborn souls, is the prayer to Our Lady of Victory; in part, it says, "...we pray, that their hearts being softened by the rays of divine grace, they may return to the unity of the true faith..."

Now, if only this effect can be seen in the rest of the family!

Posted by Hermitess Photini at 2:28 PM