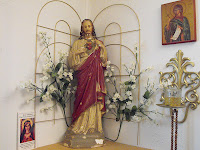 I know a young man who recently had the unfortunate experience of receiving a few fist blows to the face, and being thrown down a few porch steps.


He wasn’t really a victim in this; he was drunk, and he actively provoked the “attacks”. In fact, a couple of the blows came because he was the one attacking. But since he was very drunk, he was not able to attack effectively, nor protect himself from retaliation.
I feel bad for him, more so because I know him personally, I guess. When I think about a fist smashing into his face, I cringe; I haven’t seen him since his little adventure, but I can only imagine it will not be a pretty sight.


Greater than my empathy for the physical damage he sustained, though, is my empathy for his spiritual pain. He knows he acted stupidly. He knows that he alone is responsible for his drunken state, and although the men who inflicted the physical pain could certainly have made the decision not to, the young man knows that in their eyes – and even in his own – he deserved exactly what he got.
The young man is not Catholic. He can’t go to confession and tell the priest his sins, and experience the relief (and release) of absolution. No, instead, he will have to look in the mirror every day for some weeks to come, and be reminded of a stupid mistake – a sinful set of behaviors – that led to his current physical discomfort. The bruises on his face, and the other physical vestiges of the ordeal, will remain for some time to come an outward sign of the pain he feels in his soul.


He can’t “take back” getting drunk. He can’t “take back” the provocative things he said and the aggressive behavior in which he engaged. He’s already apologized over and over to the people involved: “I’m sorry. I’m really, really sorry. I was so stupid.” And even though they say, “It’s okay”, and even “I forgive you”, he’ll re-live it and kick himself even more for it, at least for a while. Slowly, the acute pain will fade, but there will be scars. He can’t rid himself of the pain because he’s not talking to the right Person.
I know the feeling. Even with the sacrament of confession, it is sometimes hard to forgive ourselves. We may know, intellectually, that God forgives us, but on a more gut level, we are hanging onto that sin, poking it and prodding it, feeling guilty, wishing we’d acted differently. Part of that is pride; after all, if God can forgive us, why can we not forgive ourselves?! Not to do so is to deny the saving grace of confession and absolution!


But the stain of sin remains, of course, and that’s why we do penance. And it is good, at times, to remember past sins, even when they have been confessed and forgiven and the debt paid through penance imposed by the priest – because we too quickly forget what sinners we are, and start judging others by a standard different from that which we want for ourselves. Yet, it’s a juggling act, I think, because of course satan would like us to dwell on our sins and come to despair over them, thinking that God can never forgive the likes of us!
Sometimes I feel intensely aware of the stain on my soul, and I feel that I cannot bear to be enclosed by it a moment longer; and yet, it is impossible to scrub that stain away on my own merits. It is impossible to escape the reality of the sins I have committed. I think purgatory must be like that; the mirror is clean and bright, and it reflects in perfect clarity every bruise, every stain of sin, that the fists of time have left on our cheeks…and there’s nothing we can do to rid ourselves of that stain. We must allow God and the flames of purgatory to burn it away and leave our souls pure and whole.


It must be very painful…and yet so very desirable.
Lord Jesus Christ, have mercy on me.
Posted by Hermitess Photini at 12:17 PM