If I Had a Hammer

…And I do have a hammer! 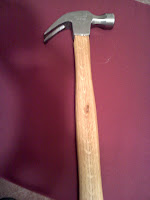 Every aspiring demon-vanquisher should have one!

A while back, I became enamored of the story of St. Marina the Great Martyr and  Vanquisher of Demons, an Orthodox saint who lived in the 3rd century. Her feast day is July 17.

Marina was born into a pagan family, but converted to Christianity at an early age through the influence of her Christian nanny. As she grew into a young woman, her beauty inspired the local Christian-persecuting governor to see to marry her.

Marina refused of course, and stood firm for her virginity and her commitment to Jesus Christ despite horrific torments inflicted upon her by the spurned governor. Twice she was visited by St. Michael the Archangel who strengthened her with his words and healed her wounds.

The young girl was then thrown into prison, and there she entered into combat with a demon. According to the story: 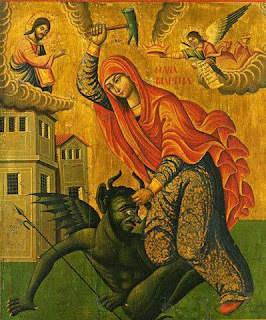 Taking on a dark and dragon-like guise, a demon appeared to Marina in the prison to frighten her. Fearlessly, Christ’s athlete seized him by the hair and, finding a hammer, beat him to the ground, completely humbling him. A great light appeared and illuminated the entire prison. All of Marina’s wounds were completely healed and not even a trace of scarring remained on her body. It is for this reason that Saint Marina often holds a hammer and is sometimes depicted beating on a demon in her icons.

I like the hammer imagery! It seems to me that I am often doing battle with little demons – I know they are little, because I am so weak that God would not allow a larger one to come and overtake me. I think He allows the little ones to come so that I can practice on them. At any rate, the hammer seemed to me to be a great symbol of demon-vanquishing – along with prayers to Our Lord and Our Lady,  the help of St. Michael and all the saints, and of course making the sign of the cross.

So I bought a hammer, which will not be used for mundane, ordinary hammering tasks, but will be blessed and remain at the ready in order to fight those demons.

Here is my night stand with all the critical elements for passing the night: holy water, a few prayers, an alarm clock, a good book, tissue, an electric blanket control (not very ascetic, I know!), and a demon-vanquishing hammer. 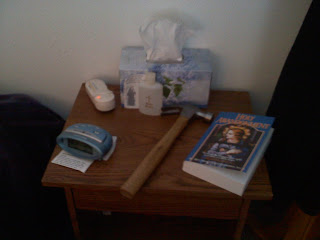 Posted by Hermitess Photini at 6:20 AM

Email ThisBlogThis!Share to TwitterShare to FacebookShare to Pinterest
Labels: St. Marina the Great Martyer and Vanquisher of Demons; spiritual warfare