I had a dog that often looked and acted like a perfectly normal, healthy, happy-go-lucky dog. But she wasn’t.  Her ailment was not physical, but mental. Being a border collie, she's always been a little neurotic…okay, a LOT neurotic... 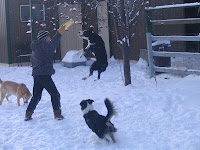 Lady was afraid of loud noises. When I first got her as a puppy, I decided to use “clicker training” with her. She was afraid of the clicker noise, and ran and hid under the bed. It took quite a bit of “un-doing” to repair that damage! Of course she was also afraid of gunshots (a frequent occurrence here in our rural “neighborhood”). And she came unglued in response to thunder – another frequent occurrence here, during the summer.

Her fear of thunder generalized to other loud rumbly noises, such as a large cattle truck rolling by on our gravel road. Lady was a very smart dog, and she even seemed to recognize that cloudy weather might mean thunder. She’d go out to play with me, but was nervous and anxious. When thunder ensued, we’d rush back into the house where I would put her in her crate. She seemed to accept her crate as a safe place, and even though she was anxious and upset, she seemed resigned to the noise.

Then her fear of thunder escalated and reached epic proportions:  she started pawing at her cage door, and biting and pulling on it whenever there was thunder. She bent the entire door, and pulled loose one of the bars. In biting the cage door, she would sometimes get her jaw stuck in it, and that freaked her out even more. The one safe place in the world was no longer safe, in her view. I began to think she would die of the terror she was experiencing. 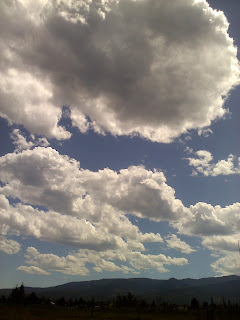 There were other issues. In general, Lady’s intelligence was her downfall. She really was head and shoulders above any other dog I’ve had (and there have been quite a few) in brain power. She was bred from working stock, and was meant to herd sheep. We tried that for a while, and she was good at it – much better than I was! She understood many words, and often picked up on things I said to her in a casual way, just talking to myself, really.

Lady didn’t have much use for other dogs. She liked people, and tolerated some dogs. Sometimes people would say “She doesn’t know she’s a dog; she thinks she’s a human.” My response was that, no, she did understand that she was a dog, and she was smart enough to know it would be better to be a human. She did what she could to convince the rest of us to treat her as one.

I guess she was too smart. Her level of understanding of the things around her caused her great anxiety, I think, because she knew enough to know that she didn’t know enough. When she knew something – like, “it’s cloudy and there’s going to be thunder” – she wanted to know how to take care of the problem. And of course, she couldn’t do that.

Lady wanted to understand things that were beyond her. It drove her crazy.

I suppose there's a lesson in that.
Posted by Hermitess Photini at 8:20 AM