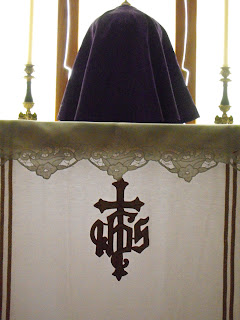 I watched the video of the Catholic priest, Fr. Francois Murad, who was beheaded by Syrian rebels. Recently, I have read that the victim shown in the video was not Fr. Murad; but that is not really the point, in a way. Someone died a horrific death at the hands of his fellow man, and a mob jeered and cheered and took photos with cell phones all the while. This picture of humanity is a bleak one.

Why did I watch the video? Well, at first I was not going to. Then I admit I felt a little curious; did they really do it? Can you really see it on the video? And I think I felt I owed it to that priest to see what they did to him, to verify it with my own eyes in a way, because he died for our Faith.

To be honest, though, I’m not really sure why I watched it.

The first time I watched it, I didn’t get very far. It was too horrific. When I could see that the man with the knife was about to start hacking away…well…I felt sick and horrified, and I stopped watching. But I went back a day later and made myself watch it. Yes, they did cut a man’s head off. It was gruesome. I wondered how a human being could do that to another human being. How could a human being even do such thing to an animal?  No one cuts the head off a farm animal, for instance, without killing by gunshot or some other means first.

Watching this horrific act made me think of the saints I read about every morning in the Roman Martyrology. The torments are described in such calm, placid terms… “he was stretched on the rack and had his fingernails pulled out, and was put to death by the sword, thus completing his martyrdom” – or similar words.  Sometimes I think about what those torments must have looked like and felt like (unimaginable), because it is significant that the martyrs withstood such atrocities and continued to profess their faith in Christ.

And so it was with the man in the video, whoever he was…and there were two others about to undergo the same treatment. It was real – no matter whether that man was Fr. Murad or not; it made me praise God for the martyrs that have gone before us, as examples of faith and courage.

It also made me weep for the pain and suffering that man endured. May he be with the saints in Heaven.

Lord Jesus Christ, have mercy on me.
Posted by Hermitess Photini at 7:03 PM